A vehicle was seized following a joint operation between police and trading standards last week (Thursday 8th), but the driver got a free lift to custody after a large amount of fake tobacco was found.

Officers from Gloucestershire Constabulary carried out a routine stop on a car travelling between Cheltenham and Gloucester and found a large quantity of what was believed to be illegal tobacco in the vehicle.

Gloucestershire County Council’s trading standards team were called and found cigarettes and tobacco worth approximately £3,700. A further £3,400 was also seized from the driver of the vehicle under proceeds of crime legislation.

Brands included Richmond and Marlboro Gold cigarettes and Cutters Choice hand rolling tobacco.  The Richmond cigarettes have been sent for further analysis as they are believed to be fakes.

Also included in the haul were packages of ‘Gold Classic’, a typical type of cigarette known as ‘cheap white’ which are manufactured specifically for under the counter sales.

Counterfeit cigarettes are usually manufactured without any quality control standards which means they don’t include the safety features that cause the cigarette to self extinguish when not actively smoked.

One man was arrested at the scene and has been released under investigation. The car, worth up to £7,000, was seized by HMRC.

Cllr Nigel Moor, cabinet member for fire, planning and infrastructure at Gloucestershire County Council, said: “This is a great example of joint working between us and the police.

“We’ve said it before, but we will not tolerate the sale of illegal tobacco in Gloucestershire. We’re working closely with our partners to stub out this trade and would urge anyone with information to let us know.”

Anyone with information on the sale of illegal tobacco, however small or insignificant they might think it is, is encouraged to report it by calling 03454 040506. 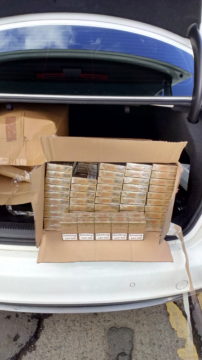