An operation to disrupt the sale and supply of illegal tobacco and alcohol across Bournemouth, Poole and Dorset uncovered more than 205,000 cigarettes, 103 kilos of hand-rolling tobacco and 23 litres of alcohol, all believed to be illicit.

The visits, as part of HMRC’s Tobacco Taskforce activity, led to suspected illegal tobacco and alcohol products being seized from 15 premises. This included:

“The sale of illegal tobacco and alcohol will not be tolerated by us or our partner agencies. Disrupting criminal trade is at the heart of our strategy to clampdown on the illicit tobacco market, which costs the UK around £1.8 billion a year, and the sale of illicit alcohol which costs the UK around £0.9 billion per year. This is theft from the taxpayer and undermines legitimate traders.

“We encourage anyone with information about the illegal sale of tobacco or alcohol to report it online or call the Fraud Hotline on 0800 788 887.”

“We are particularly keen to tackle any people or businesses that are causing harm to our communities through the distribution of illicit alcohol and tobacco. The harm caused by this illegal activity is significant both to individuals and businesses and we would encourage everyone in the community to report any such illegal activity to Dorset Police or the appropriate agency.”

Cllr Lewis Allison, Portfolio Holder for Tourism, Leisure and Communities, BCP Council, said: “This exercise was an excellent example of how a multi-agency approach achieves greater success. By BCP Council working with HM Revenue & Customs, and other partners, we’ve been able to successfully target the storage of illegal tobacco in our area.

“I would like to thank everyone involved, and hope that similar approaches to collaborative working will be adopted in the future.”

Cllr Anthony Alford Cabinet Member for Customer, Community and Regulatory Services, Dorset Council said, “Selling illegal tobacco is a crime which harms our communities.  Dorset Council takes the fight against illegal tobacco seriously and was pleased to take part in this multi – agency operation. If you have any information about the sale of illegal tobacco, please report it.” 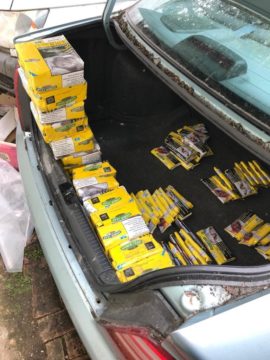