Two trading standards services on different sides of the country have worked together to convict a rogue trader who preyed on the elderly and the vulnerable.

Self-employed gardener James Holmes, 29, has been sentenced to 200 hours community work after being found guilty of fraud.

Holmes, who pleaded guilty, was sentenced at Peterborough Magistrates’ Court on Wednesday 12 July 2017.

The court heard how Holmes had targeted elderly vulnerable people in Yaxley in Cambridgeshire, and Exeter, Devon, to get them to agree to have work carried out in their garden.

Despite having just a name and phone number, trading standards were able to trace Holmes and then passed the information to the Peterborough and Cambridgeshire Trading Standards team 240 miles away. They prosecuted Holmes under the Fraud Act 2006.

Holmes also pleaded guilty to one count of engaging in aggressive commercial practices in order to get the victim to agree to the contract contrary to Regulation 11 Consumer Protection from Unfair Trading Regulations 2008.

Holmes’ business J&H Landscapes is registered to Thorney Road, Eye, and offences took place between May and August 2016.

The Yaxley victims were cold called by Holmes who offered to carry out work on their patio, path and driveway for £450. No cancellation rights notice or written quote were provided as required by law. The elderly couple also did not give written permission to start the work straight away.

The victim initially said no to him doing the work because she felt his price was too high. However, Holmes pursued the job and reduced the price until she felt unable to say no to an agreed price of £800.

Holmes did not provide this quote in writing or give the victim a notice of her rights to cancel the work within 14 days. He did not get her express written permission to start the work straight away.

After he started the work he insisted that he wanted payment in cash and not by BACS and it was at this point the victim decided to stop Holmes from working on her garden. This incident left the victim afraid to leave her own home.

In mitigation, the court heard how Holmes was a naive person and was not vindictive. It was claimed that he had an unstable income and a young family to support. He now realised he should have taken advice before setting up in business.

Trading Standards’ advice is that if you think you have been ripped off or are concerned about a trader’s trading practices you should contact the Citizen’s Advice Consumer Service on 03454040506.

They will pass on information to Trading Standards. If someone you believe to be a doorstep criminal is on your property now, and you feel threatened, contact the Police on 999 immediately.

Be sure to explore this website, and empower yourself with knowledge to take a stand again rogue traders. You can also follow the links from this website to the Buy With Confidence – Trading Standards Approved scheme. This can be found by clicking the Consumer and Business tabs at the top of this page. 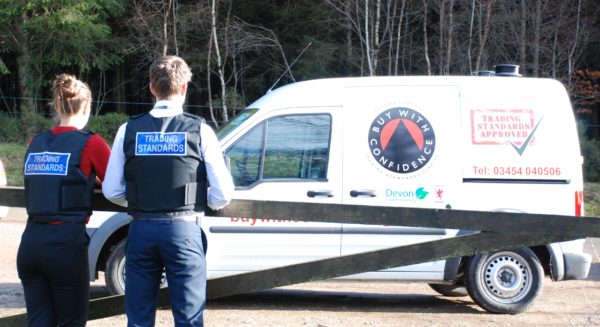