A pair of rogue traders have been jailed after defrauding Yate customers through their paving business.

Brothers-in-law William Connors, 36, of Bourne Lake Park, Swindon and Thomas Connors, 26, of Brython Drive, Cardiff have both been locked up for two-and-a-half years and are now banned from cold calling customers for the next five years.

The conmen were found guilty of fraudulent trading in connection with their business called Homepride Paving Ltd, when it was operating in Yate as well as parts of Swindon between November 2015 and May 2016.

Imprisoning both men, the judge said that they ran “a dishonest enterprise” that was designed to pressurise customers and reap high rewards.

South Gloucestershire Council became suspicious when officers noticed an advertisement for the business on a newly block paved driveway in St Andrews, Yate.

They found a total of 19 victims who came forward after using Homepride Paving, some of whom were not given written notices of their 14 day cooling off rights.

Others had their work started immediately when agreements were made and in some cases, before agreements were even made.
The men approached the pensioner around lunchtime, offering to carry out work on his house.

Other tactics include over-charging for additional items that were claimed to be necessary and increasing prices once customers’ existing driveways had been dug up by the business.

Trading Standards were so concerned about the tactics being employed by the business, they liaised with police and the two men were arrested on Cranleigh Court Road, Yate, on 6 April 2016.

A Homepride Paving work vehicle was also seized, which was found to contain over £6,000 in cash, as well as mobile phones and an iPad.

The court heard one victim, Charles Watson of Yate, was approached by William Connors in January 2016 and agreed to pave the front and side driveway of his house for £4,000.

However, upon digging up the existing driveway Connors claimed there was a problem underneath which required a special type of porous concrete to be laid.

He claimed the price of the job would need to triple to £12,000, but eventually took £7,200 in cash when he realised his customer could not meet his demands.

Councillor Heather Goddard said: “This is a great result which demonstrates how serious this rogue trader activity was, with the judge handing out a custodial sentence combined with Criminal Behaviour Orders.

“Our Trading Standards team worked closely with officers from Avon and Somerset Police to secure these convictions.

“We will not tolerate such tactics being used on our residents and I would encourage anyone who suspects that rogue traders may be operating in their area, or who may have fallen victim to one, to report the matter to the police or Trading Standards.”

Both men had previous convictions for similar offences and William Connors was on bail for another rogue trading offence in Hampshire at the time of the Yate offences.

He was eventually given a 12 month sentence in Hampshire.

Thomas Connors was also in breach of an Anti-Social Behaviour Order, imposed on him as a result of a previous rogue trader prosecution in South Wales. 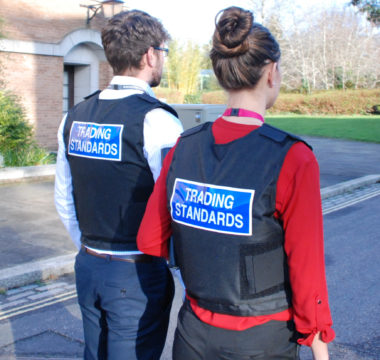