Shoppers across the UK are now increasingly likely to enjoy a genuine purchase from their local market, thanks to a consumer-friendly ‘Fake-Free Markets’ charter which is seeing its 10th anniversary this week.

An initiative of the National Markets Group for IP Protection (NMG), the Real Deal ‘Fake Free Markets’ Charter reassures consumers that they can expect to buy only genuine brands and quality goods when they shop at any local market, car boot sale or selling group displaying the ‘Real Deal’ logo.

Since 2009, more than 500 local markets have signed up voluntarily to the charter via their local Trading Standards service, helping to stamp out rogue traders and potentially harmful counterfeit products.

The NMG is a partnership of law enforcement, government and industry stakeholders, supported by the National Association of British Market Authorities (NABMA).

Patricia Lennon, National Coordinator of the ‘Real Deal’ Campaign for the NMG, said: “The Real Deal charter has proved to be a huge reassurance for shoppers.

“We cannot praise highly enough the commitment we have seen from markets and Trading Standards across the UK who have jointly signed up to the charter to protect their customers from buying untested, poor quality, potentially unsafe counterfeit products.

“In displaying the ‘Real Deal’ logo, a market reassures its customers that it is a safe place to buy and sell.

“It also sends a strong ‘keep out’ message to any would-be traders in counterfeits who have no scruples when it comes to selling sub-standard products.”

Graham Mogg, Chair of the NMG, said: “Counterfeit products are not only bad news for consumers, but also for legitimate, hard-working local business owners who risk losing sales.

“When counterfeits find their way into a market environment, the revenue goes to the black market rather than the economy.

“The trade in fakes is frequently found to be linked to organised crime – something that would horrify most shoppers or traders if they knew.”

Although a large number of outlets have signed up to the scheme, the NMG is using this 10th anniversary milestone to urge more markets to join the initiative.

More information on the Real Deal campaign and its 10th anniversary celebrations can be found at www.realdealmarkets.co.uk 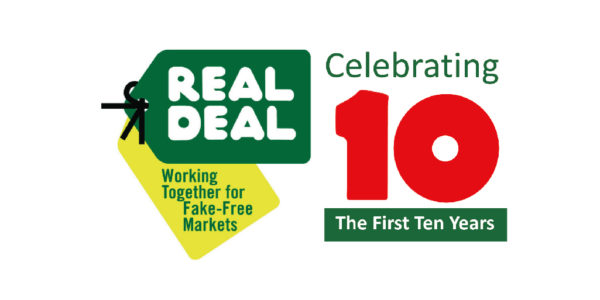