In the run up to the Festive season, sales and consumption of alcohol reach a peak but this also includes illegally produced fake wines and spirits.  Government figures show that the sale of illegal alcohol costs the UK taxpayers £1.2 billion pounds per year.

Along with stolen and smuggled booze, fake alcohol makes its way into the supply chain and ends up on the tables and in the glasses of UK homes.  Counterfeit alcohol is illegally produced by criminal gangs and made to look like the genuine product.  It is sold through wholesalers, hawked door to door to pubs and shopkeepers from the back of vans and advertised direct to consumers through social media, especially Facebook buy and sell groups.

The most commonly faked products are vodka, whisky and wine.  Whatever the product, the signs to look out for to spot the imposters are the same.

Vodka and whisky might be labelled as well-known popular brands or as a name you have never heard of and will not see in the supermarkets or pubs.  Wine tends to mimic the popular brands widely available in the shops.  Whether it is spirits or wine, the tell-tale signs to be on the lookout for are:

Anyone caught selling counterfeit alcohol can permanently lose their licence and livelihood as well as facing up to ten years in prison and a large fine.

The consequences for anyone drinking counterfeit alcohol can be even more serious.  Illegal vodka and whisky tend to be made in bulk from industrial alcohol that is not meant for human consumption and can cause various adverse health effects even when a small quantity is consumed.  The most common effects are nausea and vomiting, abdominal pain, drowsiness and dizziness. It can also lead to kidney or liver problems and even coma. Methanol, a substance which can be used in fake vodka, may cause permanent blindness and there have been instances where people have died from poisoning after drinking fake spirits.  Sellers of illegal drink will not be concerned about the age restrictions, and as the prices are generally much lower than the real thing, it is more likely that under 18s could get hold of the product with potentially disastrous results.

Cheap booze may seem like a bargain but anyone selling or drinking it could end up paying a much higher price that would change their life for the worse.

Alex Fry, Trading Standards Manager said “Don’t take the risk that cheap alcohol is the real thing.  As it is illegally made you don’t know what’s in it in terms of the actual chemicals and you don’t know the strength of what you’re drinking because it’s not been produced to the standards of the real products.”

If you think you have been sold illegal alcohol or have information about anyone supplying it you can report it anonymously to Crimestoppers  on 0800 555 111 or Citizen’s Advice Helpline on 03454 04 05 06. 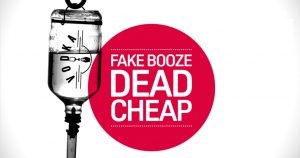